Chicagoan sax player is a busy man during so-called normal times and even
more during the Covid-19 pandemic lockdown. In the last months, he emptied
his safe of treasured live recordings, released weekly on his Aerophonic
label, while other recent projects are being released by him and other
labels. 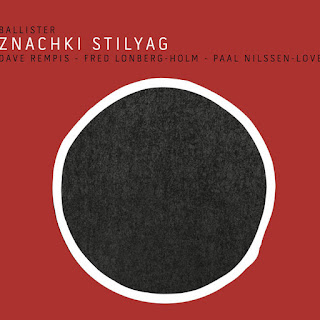 Znachki Stilyag is a somewhat nonsense title in Russian, roughly translated
with the help of google as “hipster icons.” This playful title captures the
spirit of the performance of the powerhouse trio Ballister – sax player
Dave Rempis, cellist Fred Lonberg-Holm, who also adds electronics, and
drummer Paal Nilssen-Love, at Moscow’s DOM club in October 2019. Rempis,
Lonberg-Holm, and Nilssen-Love are, obviously, not the typical hipsters but
each of them has become an icon of free and energetic music in his own very
special way, and even more so together as a trio.

Ballister celebrates this year its tenth anniversary and Znachki Stilyag is
already its ninth album, recorded during a European tour. The riotous
energy of the Moscow audience pushed Ballister to new heights. But this
live performance also marks a new era of Ballister. Rempis adds here more
space, breath, and eccentric humor to his ecstatic playing; Nilssen-Love
continues to incorporate influences from his ongoing collaborations with
Ethiopian and Brazilian musicians, and Lonberg-Holm’s breadth of musical
experience is on full display here.

Ballister focuses here on intricate, long-form improvisations, that reveal
an underlying logic and organic structure. The titles suggest some insights
about life on the road. The opening, almost 40-minutes “Fuck the Money
Changers” flows naturally from one intense climax to another – some are
ecstatic and playful free jazz segments, others are openly emotional and
lyrical and few are sparse, abstract and even exotic ones, as the trio
exhausts its fast-shifting dynamics and exploratory sonic excursions, with
laser-beam accuracy. The following “hotel Mary Poppins” is a twisted but
highly passionate version of a chamber jazz interplay, obviously, faster
and louder, and the last “Old Worms” is an explosive, freak-out with such
intense energy and rhythmic drive that could warm up the whole Moscow
region for the entire Russian winter.

One of the performances that I – and probably most of you – would pay a
fortune to be there. 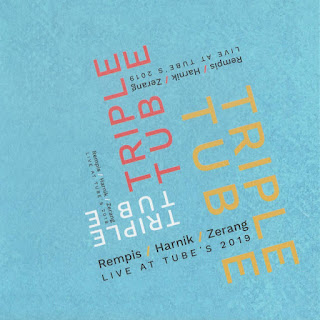 Triple Tube is the second album of the trio of Rempis, fellow-Chicagoan
drummer Michael Zerang and Austrian pianist Elisabeth Harnik, following
Wistfully (Aerophonic, 2016), and, again, was recorded live in Graz,
Austria, the hometown of Harnik, this time at Tube’s in March 2019.

The atmosphere of this performance is reserved and introspective. Rempis
plays the alto sax and enjoys the free-associative exchange of ideas with
Harnik that often suddenly ignite into intense and openly emotional ones,
while Zerang charges this tight interplay with fragmented pulse and colors
it with an array of percussive objects. Later on and throughout the second
piece, Rempis, Harnik, and Zerang suggest their distinct perspectives of a
percussive-playful conversation that shifts through abstract and more
focused, fiery moods but not explosive ones. This development highlights
Harnik’s wide-ranging ability to offer an imaginative vocabulary and sound
for every abrupt shift. She hammers the keyboards, rubs the strings inside
the piano, and sketches a fragile, almost transparent melody that invites
Rempis to even more emotional playing. Rempis, Harnik, and Zerang begin the
encore as a fragile, ethereal drone that slowly gains more power and volume
– literally, until the brief, playful coda. 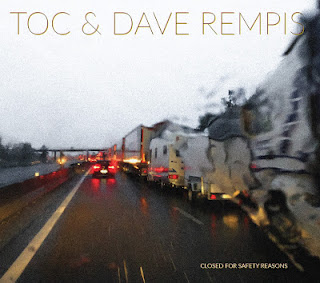 Closed for Safety Reasons presents an obvious match. TOC is French,
Lille-based trio featuring keyboards player Jérémie Ternoy, guitarist Ivann
Cruz and drummer Peter Orins that has developed its own genre-bending
aesthetics – free, hypnotic pop-funk, post-rock and jazz core, or as the
trio calls it: disturbing, orgiastic and communicative. Rempis with his
academic studies of ethnomusicology and African studies, his experience
with free jazz and free improvisation and captivating energy fits perfectly
to the unclassifiable language of TOC and its claim to shake feet and
heads.

TOC invited Rempis to join the trio in February 2018 for the release
concert of Will Never Play These Songs Again (Circum Disc, 2018) at the La
Malterie, Lille. Later that year

Rempis joined TOC again for a short European Tour and recorded Closed for
Safety Reasons at La Malterie. Local tenor sax player Sakina Abdou from the
local musicians collective Muzzix was invited to join this quartet on the
last piece. Rempis feels at home with the dense and powerful
eclectic-electric-psychedelic mix of TOC. His energetic and restless
playing on the tenor and alto saxes pushes TOC even further to more
extreme, wild, and intense but also to abstract and mysterious territories.
He blends organically with the free-associative, joyful trance of the
free-improvised pieces. The addition of Abdou on “Temporary Lease” deepens
furthermore the ethereal-atmospheric-psychedelic spirit of this meeting and
she immediately finds a common language with Rempis. 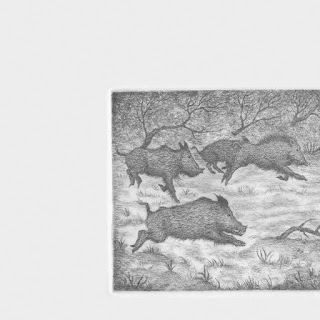 Rempis first engagement with TOC coincided with The Bridge invitation to
connect with more French improvisers, in an attempt to enrich their methods
and philosophy about free music, or as double bass master Barre Philips
calls it: “try to widen the circle”. Rempis came to this meeting with
fellow-Chicagoan reeds player Keefe Jackson, who hosted him in his Project
Project and Likely So bands, and met the French percussionists – Peter
Orins – from TOC, and Didier Lasserre and pianist Christine Wodrascka. This
quintet was supposed to tour this year, but, again, the Covid-19 pandemic
forced the cancellation of this tour.

The beginning of this meeting is hesitant and sparse. Rempis and Jackson
sound as searching for melodic, playful free jazz dynamics while Wodrascka,
Orins, and Lasserre focus on sound-oriented free-improvisation, but soon
all find common ground and dive into a heated, collective conversation of
five strong-minded, “forces of nature” as The Bridge call them. And already
on the second piece “Cristatus” this quintet establishes a stimulating
interplay that challenges the ecstatic, free jazz aesthetics of Rempis and
Jackson with the abstract and elusive sonic paintings of Wodrascka, Orins
and Lasserre. This interplay intensifies later on and the following pieces
“Ukh Ukh” and “Gu Gu Gu” stress the profound affinity of Rempis and Jackson
and the imaginative and detailed rhythmic conception of the French rhythm
section. On the last “Gu Gu Gu” it is clear that both sides assimilated
ideas from the languages and syntax of each side and expanded their
improvisation strategies. This piece swings naturally between driving
rhythmic patterns and minimalist and abstract sonic searches. 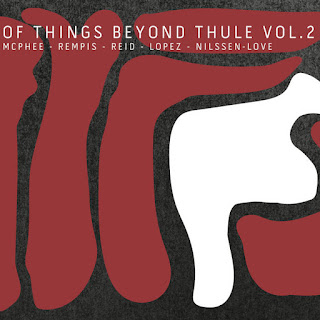 The second volume of this ad-hoc quintet, created by chance, and featuring
heavyweights as Joe McPhee on Pocket trumpet and tenor sax, Remips on alto
and baritone saxes, cellist Tomeka Reid, double bass player Brandon Lopez,
and drummer Paal Nilssen-Love, is different from the

(Aerophonic, 2020) that offered slow, contemplative development of one,
extended piece. This volume offers four free-improvised pieces that ebb and
flow in their own accord between lyrical and reserved conversations and
powerful eruptions. Both volumes were recorded on the same warm and
intimate night at the Hungry Brain club in Chicago in December 2018.

This volume highlights McPhee’s unique gift to articulate – including with
vocals – simple, elegant melodies, often with only a few phrases. McPhee’s
dark, warm tone immediately sets the spirit of every piece, and again and
again, brings the quintet into quick focus. Rempis wraps McPhee’s wise
gestures with lush harmonies full of cinematic and quiet, pastoral beauty
that distill his full arsenal of sound. Their beautiful, emotional
conversations are the center of this volume,. The ferocious outbursts of
the rhythm section of Nilssen-Love, Lopez, and Reid cleverly contrast these
deep talks, but the whole quintet never loses sight of their collective
mission. Or as Rempis puts it: “a genuine understanding of how to be
responsible to and for one another”. 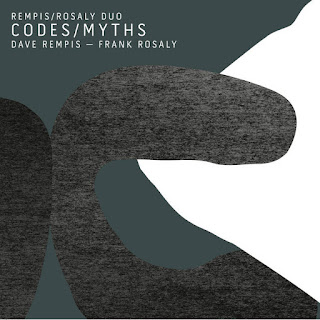 Rempis calls the almost twenty years musical relationship with former
Chicagoan, now Amsterdam-based percussionist Frank Rosaly a
once-in-a-generation variety. These close friends have worked together as a
duo since 2004, and later on in Rempis Percussion Quartet, Ingebrigt Håker
Flaten Chicago Sextet, and Pandelis Karayorgis Quintet, have seen one
another through various relationships, family trials and tribulations, and
other life-defining moments. These experiences solidified a unique musical
affinity that is singular in its intimacy and its strength.

Codes/Myths was recorded live at the Elastic Arts club in Chicago in
January 2018, and you can sense instantly the sheer emotional joy of two
old friends rediscovering each other, feeling totally relaxed, completely
at home. There is no anxious rush to explore and exhaust musical ideas or
to reach cathartic climaxes but to suggest a mature and confident vision of
two experienced improvisers who take their time and investigate every
ramification of one another’s statements and all aspects of their highly
nuanced rhythmic interplay. The extended pieces “Patterns in Distance”,
with Rempis on the baritone sax, and the shorter one “Air in Between”
sound like deep and soulful meditations with some melancholic colors on
life’s struggles but also on the comfort of profound friendship and only
close to its conclusions settle on delicate grooves. The shorter piece
“Glitch” and the last, extended “Aletheia” offer some insight into the
raw, kinetic energy of this duo, documented on their previous album
(Cyrillic, 482 music, 2009), but, still, both pieces develop in a patient
manner.

Rempis says that Codes/Myths is “more than a record, it’s a living
illustration of the human as social animal, and transparent expression of
how intimate that can be”. Say no more. 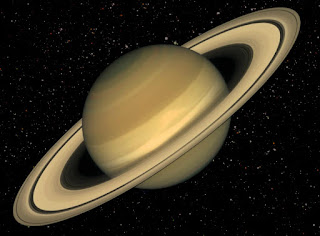